1. Monte Generoso Mount Generoso offers breathtaking views of both Switzerland and Italy. There are many different hikes leading  to the top, most of which you can find here.  We have taken the shorter (4 hour) hike from the Bella Vista parking lot.  You can take the train from Riva San Vitale, hike from Mendriso, … END_OF_DOCUMENT_TOKEN_TO_BE_REPLACED

We have a view of Monte Generoso from our bedroom window and have wanted to hike it for years.  Finally, this last weekend we made the climb. Mount Generoso offers breathtaking views of both Switzerland and Italy. We did a bit of research before climbing the mountain. There are a few options to get … END_OF_DOCUMENT_TOKEN_TO_BE_REPLACED

I knew getting baby weight off was going to be hard so I made a goal……. 8 months from giving birth there was going to be a marathon in Rome. I decided if I was going to run a marathon, why not in Rome? So I invited all of my friends and two of them took me up on the offer. It was great fun having friends to train with. 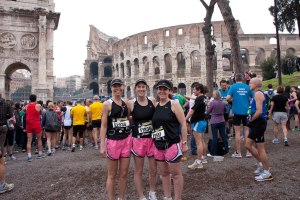 Right before the race, all of our nerves were a little un-easy but the minute the race started, it felt great. We decided to go the HOT pink shorts route. It made finding us in the masses of people a lot easier.

A last minute choice to not run with a belt resulted in getting creative with a method to carry my gel shots. Jason came up with this one and it worked perfect. 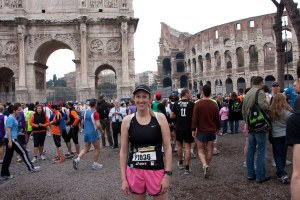 All ready to start the race. Italy requires health physicals in order to participate. My EKG came back weird so I was referred to a cardiologist. It was nerve-racking, I thought maybe I wasn’t going to be able to run. The cardiologist told me that marathons were very hard on the heart so I decided to implement Jeff Galloways run/walk method.

The race begins. The first part of the race was my slowest because it took forever to weave through all the people. At one point people were walking because you couldn’t pass people.

Thankfully these guys got to be in front because they were crazy fast!! The winner was 2 hours 8 mins!

Can you find me? I paced myself behind the red balloon pacers. I stayed with them for 2 hrs using my run/walk method but then I had to have a bathroom break. The line for the porta-potty was long. So it was so sad watching my red-balloons disappear. The bathroom break took 10 mins! I was so frustrated I wasted so much time. It took me an hour to catch back up to the red-balloons but I did.

The red balloon pacers were these Italian guys and they were hillarious. When they found out I was an American from CA one guy told me that CA was his dream and he would trade his house in Rome with me. haha. The same guy also told me not to drink too much water and gave a honey shot. Yum!

There were some interesting participants. This guy dressed Roman style. We had a barefoot clown, a lady who bounced a basketball the whole way, men who peed their pants while running, people throwing up……and more!

Can you see the relief on my face? This is right after I crossed the finish line. It was such an amazing feeling! My official time was 4:40 but I subtracted my 10 min pit-stop and calculated I ran 26.2 miles in 4 hours 30 mins. I was happy with that.
I ran about 10 1/2 min miles and that included my run/walk method. I never hit a wall and felt great the whole way. The last mile my thigh started to cramp but if that’s all for 26.2 miles, I’ll take it! 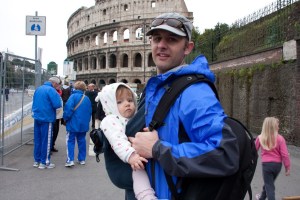 My fan-club. It was so fun seeing Jason on the side-lines cheering me all along the way. 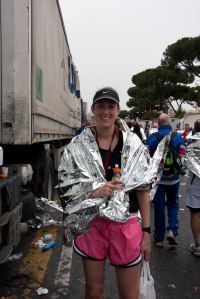 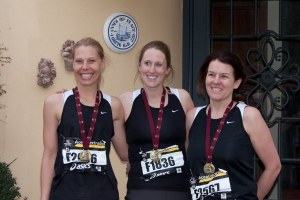 All finished!!! I had such a great experience and was glad I could share it with 2 of my girlfriends.

Posing with our medals. That night we all went to Papa’s Baficcho for dinner and had a GIANT feast. We ordered 4 plates of focaccia, pizzas, pastas, anti-pastas, 11 desserts….. and we ALL pigged out. It was such a great feeling of accomplishment, we felt like we deserved it 🙂 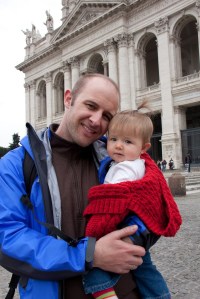 We have stayed with Anne at Anne’s Place a few times in Rome and she is starting to feel like family. She knitted this cute little sweater. Thanks Anne!

The baby was such a good sport being toted all around. Here she is fast asleep. Ciao Bella was said quite often to her.

The night before the big race we registered at the Marathon Village and met up with everyone. I wouldn’t recommend visiting Rome during the marathon. There was an extra 80,000 people plus gates and detours everywhere.

. Of course our last stop was to the Trevi Fountain to throw in a coin insuring we would return again 🙂

Running past the Spanish Steps