Route: St. Moritz / Pontresina – Tirano, Italy Duration: 2 hours (1 direction) We finally got to experience the Bernina Express train and I must say it was AMAZING. Crossing over the Swiss Alps on this little red train (UNESCO World Heritage railway) is a wonderful way to soak in the sights of beautiful Switzerland. … END_OF_DOCUMENT_TOKEN_TO_BE_REPLACED

Have you ever been somewhere where you feel like you could be in a fairy-tale? Well, Switzerland can definitely do this to you. Imagine a valley, where every direction you look there are waterfalls cascading off the sides of mountains, cows grazing, and Swiss Cottages dotting the rolling hills. Really, it is straight out of … END_OF_DOCUMENT_TOKEN_TO_BE_REPLACED

We have a view of Monte Generoso from our bedroom window and have wanted to hike it for years.  Finally, this last weekend we made the climb. Mount Generoso offers breathtaking views of both Switzerland and Italy. We did a bit of research before climbing the mountain. There are a few options to get … END_OF_DOCUMENT_TOKEN_TO_BE_REPLACED

While my mom was here she watched the kids so Jason and I could enjoy a weekend away. We decided on Strasbourg, France which meant amazing food and great shopping, both a favorite of mine.

We made reservations for Buerehiesel, a Michelin stared restaurant. It did not disappoint. The restaurant itself was located in the middle of a park in Strasbourg, a beautiful setting. We had the first seating at 8pm and arrived a little early to see the staff through the window enjoying their own meal. That would be a bonus to working somewhere like this, amazing food, before work. We ordered the prix fixe menu which consisted of: 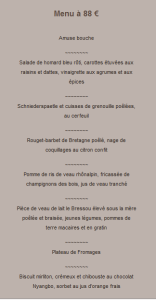 Neither of us speak French but Jason knows enough of the French words for food that we had a good idea of what we were eating.

Self portraits with our cell phone. 🙂 It was a first for frog legs for us. I think it’s possible to make anything taste delicious in a good reduction sauce.

The best course was the ris de veau (enlarged thymus gland from a calf). Doesn’t sound appetizing but was amazing.
The French are known for their sous-vide cooking (vacuum cooking in a plastic bag for hours) I only knew about this because Jason loves to cook and has tried this method in the past. Anyways, if you don’t want something PERFECTLY cooked, this is the way to go and the only method used at Buerhiesel.

3 thoughts on “A weekend away in Strasbourg”