1. Monte Generoso Mount Generoso offers breathtaking views of both Switzerland and Italy. There are many different hikes leading  to the top, most of which you can find here.  We have taken the shorter (4 hour) hike from the Bella Vista parking lot.  You can take the train from Riva San Vitale, hike from Mendriso, … END_OF_DOCUMENT_TOKEN_TO_BE_REPLACED

We have a view of Monte Generoso from our bedroom window and have wanted to hike it for years.  Finally, this last weekend we made the climb. Mount Generoso offers breathtaking views of both Switzerland and Italy. We did a bit of research before climbing the mountain. There are a few options to get … END_OF_DOCUMENT_TOKEN_TO_BE_REPLACED

We finally got to see a Swiss tradition that we have been wanting to experience for years.   In the springtime the cows are taken up the mountains to graze for the summer. Then, at the end of summer, the Swiss farmers bring their cows back down from mountains. It is called the Alpabzug.  Not every Swiss town participates,  you can check out the Swiss tourism site  for participation towns. Usually the Alpabzug takes place in the month of September.

Just near the north entrance of the San Gottardo tunnel, which separates the German from the Italian speaking regions of the country, is a little village called Wassen. We have driven past this village many times but have never stopped.  Wassen is such a quaint Swiss Village. 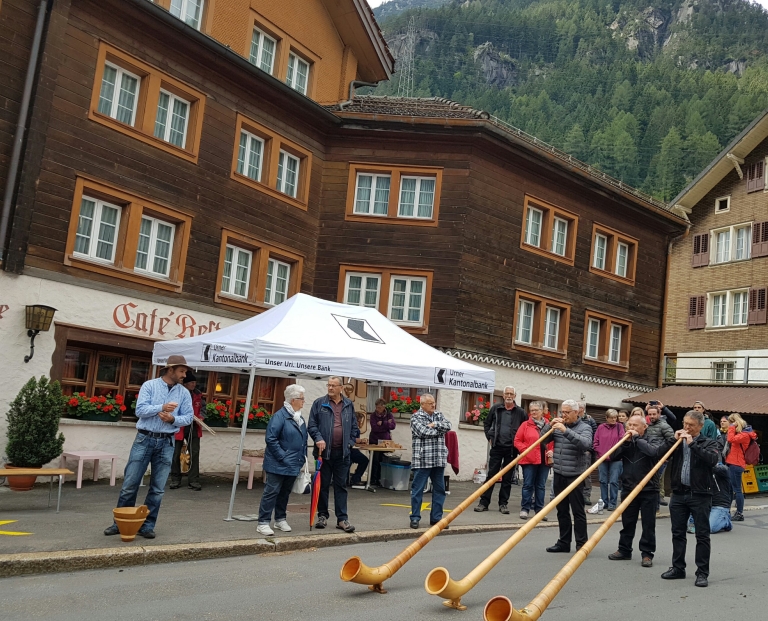 The Alphorns are very traditional and actually used by the farmers to call the cows into the barns at milking time.

Alpabzug celebrations are a big deal in these villages. Typically there is a town market where you can get all the local goodies, including raclette and bratwurst for lunch.

Each cow is adorned with a head piece and giant bell. It really is quite the sight to see.

Switzerland has different cantons, which are like states, each canton has their own flag. Wassen is in Canton Uri, which is represented on the yellow flag.

The blue shirt, worn by this farmer, is a traditional Swiss costume. Each Canton has their own type of costume.  Between the 26 Cantons in Switzerland there are over 700 types of tradition Swiss costumes.

The local farmers and their family walk their own herd of cows down the mountain.

We really enjoyed our first experience at the Alpabzug and would highly recommend seeking out one if you are in Switzerland during the month of September.