UNESCO world heritage sites are “….sites of outstanding cultural or natural importance to the common heritage of humanity.” {wikipedia definition}.  The Alhambra is just that, outstanding and more.

The Alhambra is a fortress perched on a hilltop in Southern Spain, overlooking the city of Granada. It’s a 14th-century construction built by the Moors.

The Alhambra is impressive in more ways than one. How a civilization was built without natural water means is more than ingenious. The man made running canals, rivers, aqueducts, and pumps throughout the Granada will make you wonder how they did it.

The architectural influence of the Moors can be seen throughout the Palace and Fortress.

In order to preserve and keep the Fortress well maintained the number of visitors per day is limited. Because of this, I would highly recommend buying your tickets online.

In the distance, you can see the Sierra Foothills, such a beautiful setting.

Advice for those traveling with small kids. Many of the areas do not allow for strollers, which means you constantly have to check your stroller, this can be a pain.  If possible, take a backpack carrier.

I am sure you will respect the beauty and all the efforts made in preserving the Alhambra.  If you get the chance take the time to visit The Alhambra, it won’t disappoint.

Have you been to Southern Spain? Would love to hear some of your favorite sites.

Recently, I was asked for some advice on traveling to Barcelona with kids. So here you have it, a post on Barcelona.  The mixture of sunny skies, relaxed atmosphere, great food, beaches, and culture make Spain a wonderful place to visit. It’s a family favorite.

Arrival in Spain:
Train:
Barcelona has 2 train stations. The Sants Station is used mainly for domestic routes and is the main station. Station Franca is used more for international routes. If you are arriving from outside of Spain check to see which station you will be arriving in.
Barcelona has a great metro system, stopping almost everywhere you want to go. It’s cheap too. But be smart, pick pocketing is big. I’ve witnessed a few people pick-pocketed here. Keep your wallets close, especially when getting on and off the trains.

By Plane:
Barcelona’s Airport El Prat de Llobregat has a fast connection into the city on the train or the Aerobus.  It’s only 14km from the city center, making it a convenient airport to fly into.

By Car:
You don’t need a car in Barcelona. Like most European cities, the train has great connections.  If you find yourself driving into Barcelona reserve a spot in a parking garage for the duration of your stay.

What to see:
The Pablo Picasso Museum – Free on the first Sunday of each month, closed Mondays
Sagrada Familia– The famous Gaudi church still under construction, lines can be long,  but worth the wait.
Casa Mila, Gaudi’s work, looks like melting ice cream, kids found this fascinating.
Park Guell -Parks in a neighborhood built by Guadi, this was a hit with the entire family.
Mercat de La Boqueria – a must see, an awesome food market in La Rambla.
Magic Fountains, water set to music and lights, only in the summer nights.

Some ideas to keep the kids entertained:
Chocolate Museum, we went here mostly to entertain the kids. Coming from Switzerland I did not find this museum to be all that. But if you want to enjoy the smell of chocolate and a small sample, give it a try.
Other ideas: Renting bikes. The city was too intimidating with young kids on bikes, but biking along the promenade is a great alternative. Some other ideas we enjoyed as a family while in Barcelona…. Flying kites on the beach, picnicking on the beach, watching the street artists in La Rambla.

Where to stay:
If you want to be right in the action La Rambla and the Gothic area are popular. But remember the connections in Barcelona are great.  If you choose a little quieter neighborhood you will only be a ride away from the action. We stayed awhile so we opted for an apartment close to the beach in a local neighborhood.  Personally, I like staying in the city but in a quieter neighborhood.  Check out my previous post to help you hunt down the perfect location.

And one cannot over look the food.  A must; paella, horchata, churros and chocolate. Not necessarily in that order, or together, but consumed nonetheless.

There is so much to do and see in Barcelona but hopefully this provides a base for those traveling there for the first time.  Those who have been there before….. What are your favorite places to see/visit?

Like Loading...
I am going to try and do a weekly trip snapshot of areas we have visited.  I will start with a trip we just returned from. Hopefully this information will be useful to those traveling in the area. 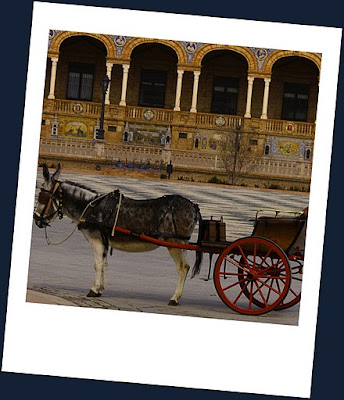 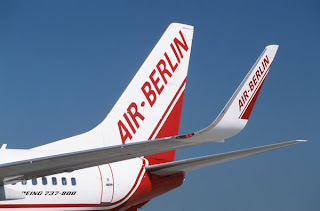 Home base?
A must see in the Area? 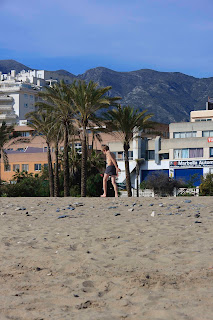 Malaga, is a resort area, really built up.  The beaches are a must. Golfing is also a must. Gibraltar is near by and is owned by the British. There is a strong presence of British in the area but most Spaniards did not speak English.  We had heard Gibraltar was a traffic nightmare, so we didn’t even attempt to go. The Rock of Gibraltar is a famous landmark and you may want to check out.  We had planned on taking a ferry to Morocco for the day but had a medical emergency.  We will just have to make another trip to Morocco 🙂 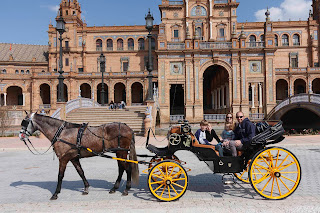 Seville is for sure a must see, about a 2 hour drive from Malaga.  Seville is a charming Spanish city with beautiful architecture, sites, great food, & of course shopping.  I’d never seen so many horses and buggys in one city. I highly recommend it as a way to see the city, especially if you have kids with tired legs. Use your bargaining power for the buggy ride. The city has a going rate of 50 Euros for an hour buggy ride but there so many you can bargain your way down.
I’d also recommend a tour of Seville’s bull ring, Plaza de Toros de la Real Maestranza de Caballería de Seville,. Tickets are only 4 Euros for adults and include a tour every 30 minutes in English or Spanish. Kids 12 and under are free. 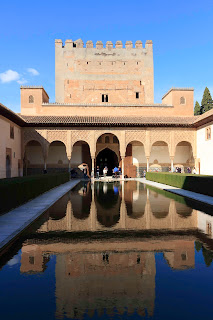 The Alhambra, is a fortress & Palace built by the Moorish in the city of Granada.  It’s about a 2 hour drive but well worth, just to see the incredible architecture and grounds. Tickets are limited daily so it is recommended to pre-purchase, especially in high season.  Adults are 13 Euros and kids 12 and under are free.

Just a little snapshot of what Malaga and the surrounding areas have to offer. We were only there 1 week and would like to go back. If you’ve been to this area, I’d love to hear your recommendations.

The road to Ronda reminded me of driving on the road to Hana, minus the bull crossing signs and lack of the ocean, bridges and waterfalls. Really it was just the winding road and our GPS kept adding the time on, it felt like we were never going to get there, but we did.

The city of Ronda sits above a step Canyon and is well worth the drive to the beautiful city perched on the side of the El Tajo canyon.

The Puente Nuevo bridge in El Tajo canyon spans across the highest point of the gorge The views from on the bridge are stunning but also from afar.

We love visiting these little towns with so much history and love for their culture.  Ronda has a long-history with bull-fighting and a visit to the Bull-Ring  should be on your list. Bullring of the Royal Cavalry of Ronda is full of information on the history of Bull-fighting in Spain.

The view from above is quite breathtaking. Thankfully, there is fencing along the view areas- it is not a view for one afraid of heights.

The  town is full of charming architecture and orange trees left and right. Ronda has a few museums that are worth a visit if you have time.

And of course, a trip to Spain means chocolate churros;  always a hit with our family.  We’d recommend a stop at the Churrería Alba, the freshly warm churros will not disappoint.

It took us about 10 hours to drive to Barcelona. We spent the night in Nimes, France (beautiful city) on the way down. On a side note, if you ever see a Formule 1 hotel, run fast ) After a series of unfortunate events we found ourselves hotel-less. Trying to find a play-pen, dog friendly, 5 person hotel in Europe is pretty much impossible…….dog friendly being the easiest to find but not so crib friendly. Bottom line, run and run fast, from all Formule 1s.

We stayed in the Rambla Poblenou part of Barcelona which was walking distance to the beach. So after checking into our apartment our first and last stop that day was……the beach.

We loaded up our car, 3 kids and dog included, and took off on adventure through Spain and France for 2 weeks. It was packed full of adventure, mishaps, food indulgence, and more. Pictures and stories to follow once I tackle the pile of laundry………