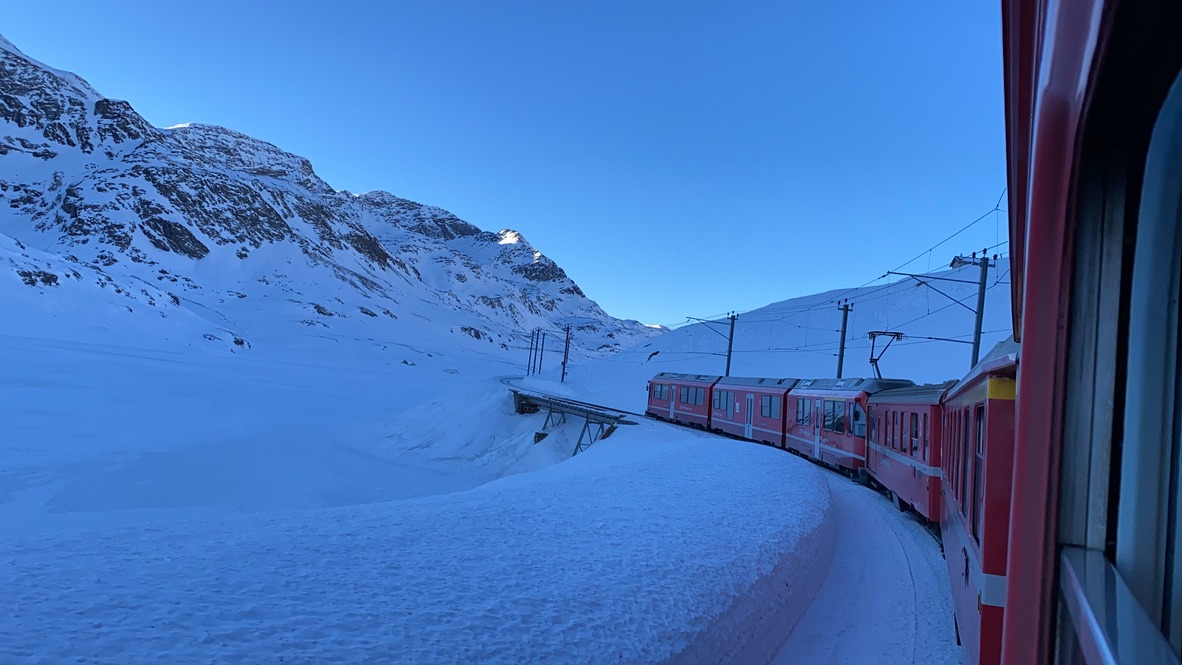 Route: St. Moritz / Pontresina – Tirano, Italy Duration: 2 hours (1 direction) We finally got to experience the Bernina Express train and I must say it was AMAZING. Crossing over the Swiss Alps on this little red train (UNESCO World Heritage railway) is a wonderful way to soak in the sights of beautiful Switzerland. … END_OF_DOCUMENT_TOKEN_TO_BE_REPLACED

Have you ever been somewhere where you feel like you could be in a fairy-tale? Well, Switzerland can definitely do this to you. Imagine a valley, where every direction you look there are waterfalls cascading off the sides of mountains, cows grazing, and Swiss Cottages dotting the rolling hills. Really, it is straight out of … END_OF_DOCUMENT_TOKEN_TO_BE_REPLACED

We have a view of Monte Generoso from our bedroom window and have wanted to hike it for years.  Finally, this last weekend we made the climb. Mount Generoso offers breathtaking views of both Switzerland and Italy. We did a bit of research before climbing the mountain. There are a few options to get … END_OF_DOCUMENT_TOKEN_TO_BE_REPLACED

A few years back I was bitten by a travel bug and this is how it came about.   Our first trip out of the country was to Europe in 2007.

We traveled to Italy with my parents and  Fell.in.love. with Italy.

Then 6 months later we found ourselves living in Europe.

I know we sound crazy and looking back I think we were crazy but wouldn’t change it.

A time-line of how our move abroad came to be……..

We took our first trip to Europe and loved it but my husband wasn’t quite sure he wanted to move.  We lived by family & friends, had a great job and home and loved where we lived. But it couldn’t hurt to send out a few emails, right?  I started to send out emails all over Europe, focusing mainly on The Netherlands. I spent a lot of time on IT Job board.  I must have sent out a 100 emails.  We started hearing back, most with a response like below sent in April of 2007.

Do you have a work permit to work in Europe?

That was the million dollar question. And of course, our response was no, we needed someone to sponsor us.

We received emails from 3 companies in Germany and Switzerland, all wanting to set up phone interviews.  We had never considered Switzerland and knew nothing about it besides the Matterhorn was there. Screenings went well, followed by more phone interviews. They wanted to meet face to face.

My husband made his journey out to Switzerland to interview with the companies.  He called me after the interview and I asked him, “So what do you think of Switzerland?” His response, “It’s ok, it’s kind of cold” but by this part I was sold. I wanted to go.

Offers were made. We weighed our options between Germany and Switzerland.  Besides the 2 day interviewing we had never been to either country, neither of us spoke German, we knew nothing.  No company at this point could guarantee a working permit either.

We submit all passports and documents to start the process to see IF we could get a working permit. We still had no idea if this would be a reality. I spent a lot of time on the English Forum, a forum for expats in Switzerland.  I read all about the permit approval process and people’s stories of getting denied, the quota of permits they give out, etc.

August 31, 2007 After 8 weeks of waiting we woke up to an email saying our VISAS were APPROVED.

And just like that, we were moving to Europe!

We were on a permanent local hire, so that meant we were moving ourselves.  That also meant, NO RELOCATION PACKAGE, NO CAR, NO SHIPMENT, NO HOUSING.  Most people who move abroad, transfer with companies and get relocation packages. I became our own personal relocation specialist, we spoke no German, making the whole process a 100% harder.  But hey, it was the adventure we signed up for and the reason we decided to move to Europe in the first place, to give our family the experience of living abroad.

September 2007 (6 months after our first trip to Europe!)

We sold almost everything we owned, kind of a liberating feeling. We purchased our one way tickets to Switzerland.

We said our goodbyes and flew out the last week of September. This is our story of our move abroad in a nutshell.

Yes, that is all of the luggage we took to move abroad, 8 bags